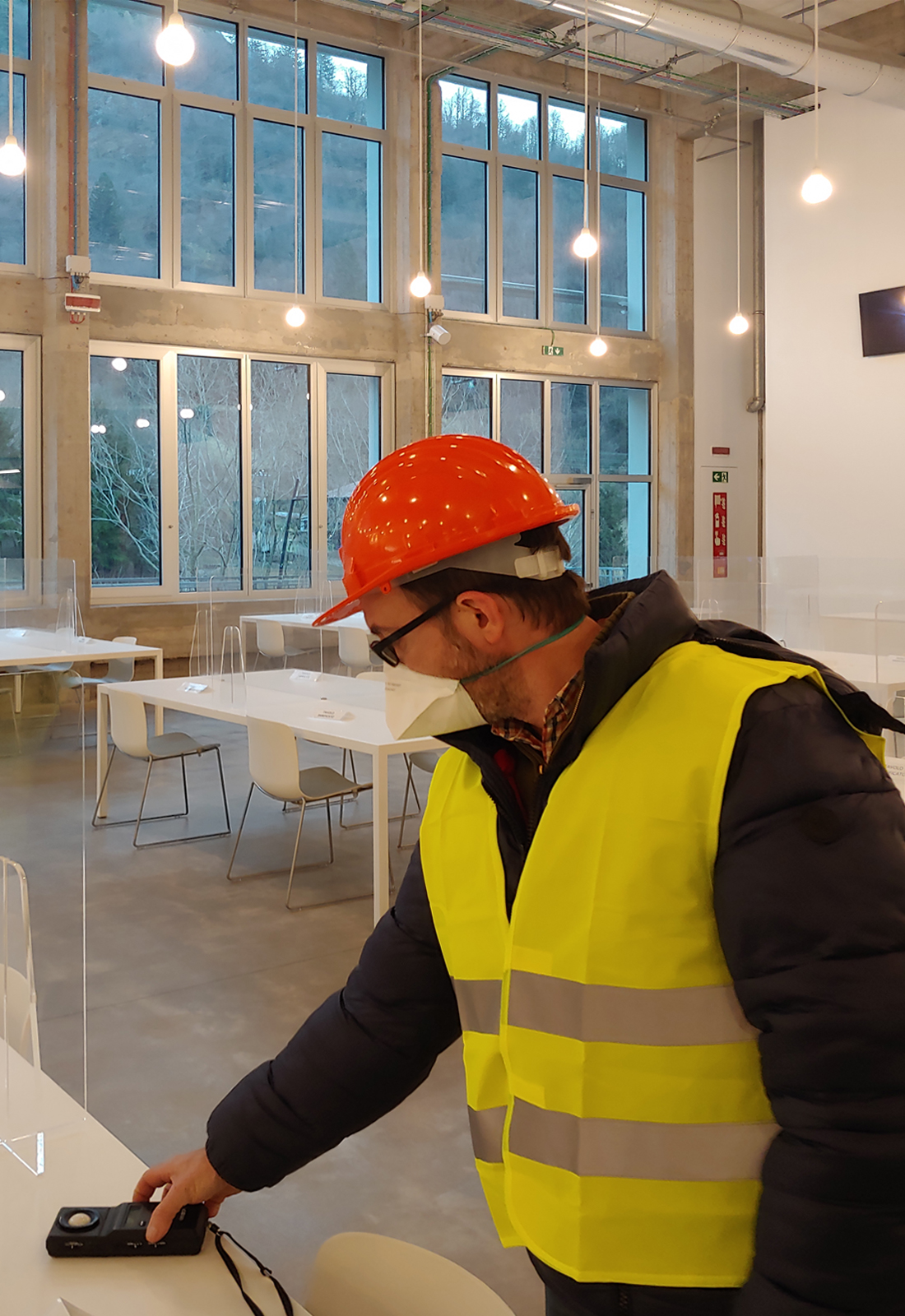 How did the lighting designer of the past develop a lighting project? What materials should be used in an accurate lighting solution? How did lighting specialists make calculations prior to the advent of lighting simulation software? To answer these questions, we need to analyze several principles of physics concerning light. Any source of radiation, such as the sun, for example, emits an infinite number of rays. The simultaneous propagation of electric fields in a straight line is called electromagnetic radiation. All electromagnetic waves follow the same laws of physics, particularly in terms of their propagation, reflection, and refraction, but their effects essentially differ in the energy they carry— that is, in their wavelengths λ.

A small band, ranging from 380 nm to 780 nm, which can be directly perceived by the human “brain-eye” sensor, is visible light, or simply light. If light is made up of a finite amount of radiation with a distinctive wavelength (monochromatic radiation), a spectrum of lines of different λ values is observed, corresponding to what we call “pure” colors. If, on the other hand, it is composed of a continuous mixture of all the wavelengths in different measures (white light), a continuous spectrum is obtained with an indistinct passage from one color to the next. Since all light sources emit radiant energy, it is advisable to introduce the physical quantities defining the emission characteristics of the sources themselves in relation to the power and to their geometric distribution. Light is electrical energy transformed into light energy.

Thus, the basic measurement is the watt. The watt is derived from two other factors— namely, the intensity of the electrical current in amperes and its potential difference (voltage) in volts. The number of watts is equal to the intensity in amps multiplied by the potential difference in volts. Let’s imagine that electricity flows out of a pipe like water. If the pipe is very thick, not much pressure is needed to allow a lot of water to come out. With a thin pipe, by contrast, if the water comes out under strong pressure, in a certain unit of time, an equal amount of water can be obtained as that flowing from a thick pipe.

The thickness of the pipe can be compared to the intensity of the electrical current in amps and the water pressure to the potential difference in volts. The potential difference is generally a fixed factor of the electricity distribution network but it can be varied using a voltage transformer. The ampere factor is variable because it is concerned with the installed electricity meter. The unit of measure we began with was the watt because it represents the consumption needed to produce light energy. There is, however, no direct relation indicating how much light is obtained from a watt. The output depends on the systems and construction measures implemented by the manufacturers. The unit of measurement for light intensity is the international candela, whose characteristics are established by international agreements.

A candela irradiates its luminous flux in all directions in the form of a sphere with itself at the center. The surface of this sphere, at any distance from the center, is 4 ∏ multiplied by the radius squared, that is 12.57 times the square of the radius. We can imagine the sphere to be made up of 12.67 cones, whose vertices meet at the center of the sphere. The luminous flux that a candela irradiates in one of its cones is called a lumen. The lumen is the unit of luminous flux. Its magnitude is derived from the energy flow; radiation is evaluated according to the visible spectrum of the observer. Another unit of measurement is thus needed to define the degree of illumination with a term introduced in photometry— illuminance. Although this term is often used generically, it is the relationship between the luminous flux incident at a point on a surface and the surface itself. Its unit of measurement is the lux, which defines the illuminance received by a surface of one square meter at a distance of one meter from a source with a luminous flux of 1 lumen. 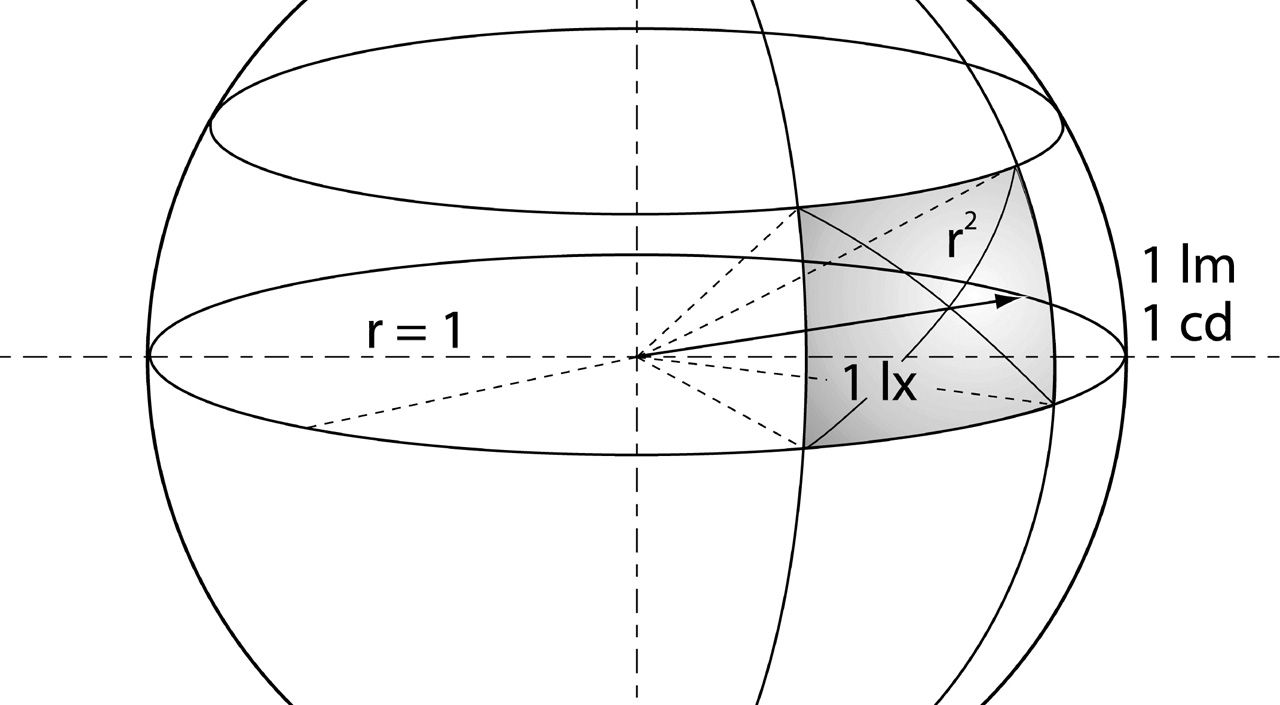 The illuminance varies depending on the distance from the source. A source can thus be characterized, not only by its luminous intensity (from which a certain flux is derived in lumens) but also by the concentration of this intensity in a small or large space, from which its brightness is derived. The brightness relates to the naked source, the sparkling light effect, recently forgotten due to a preference for LED sources designed for visual comfort. To summarize, the basic parameters for an architectural lighting solution are:

It wasn’t until the 18th century that the physicist Lambert laid the foundations of photometry, starting from geometric and physiological knowledge about time. Whether light crosses a transparent surface, is reflected on an opaque surface, or is subjected to both phenomena on a translucent surface, part of it is re-emitted by this surface in the following two ways, which are more or less prevalent depending on the material: 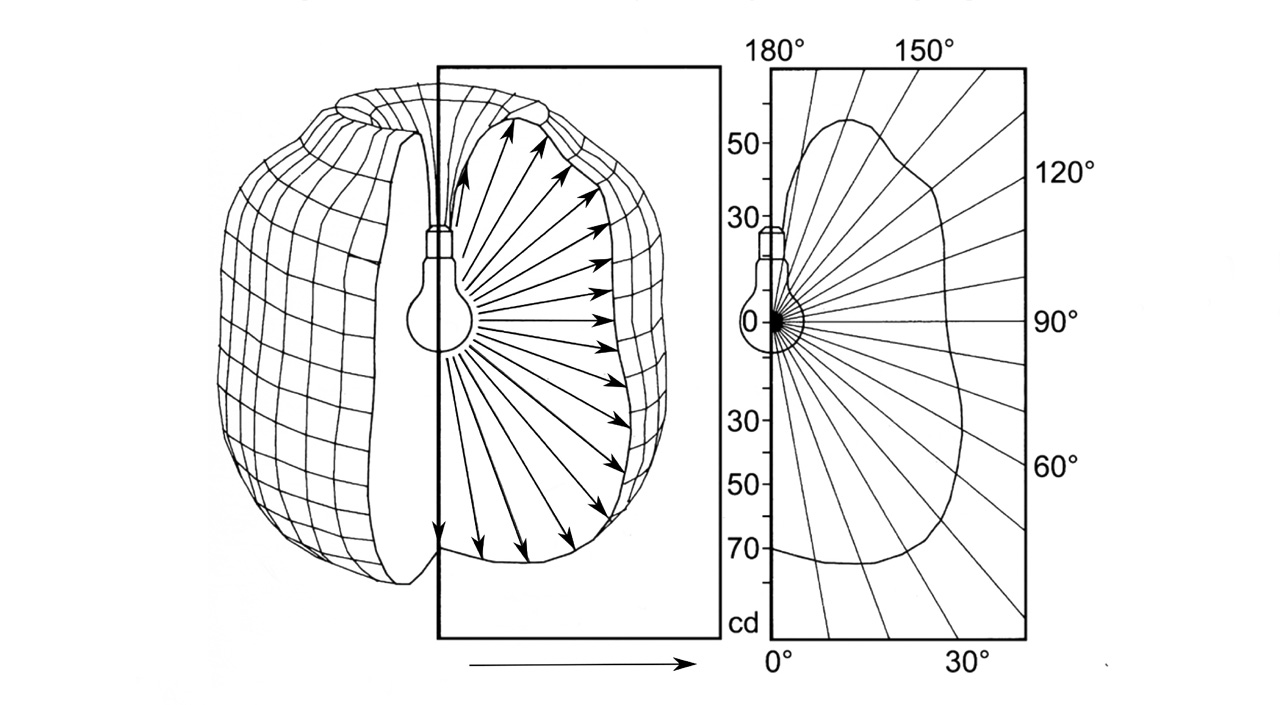 There is a relationship between the illuminance received by a surface S, with a reflection coefficient p<1 and the luminous intensities reflected in the upper half space of the S plane, in the very frequent case in which the luminance of S is independent of the direction of observation. This kind of uniform diffusion occurs with all finely divided materials that bounce the light in all directions, such as paper, matte paint, and building materials. If we consider the luminance of S to be constant, the diffusion indicator, a curve enclosing the vectors of the intensities, is a sphere tangential to S.

The threefold function of Custom Lighting 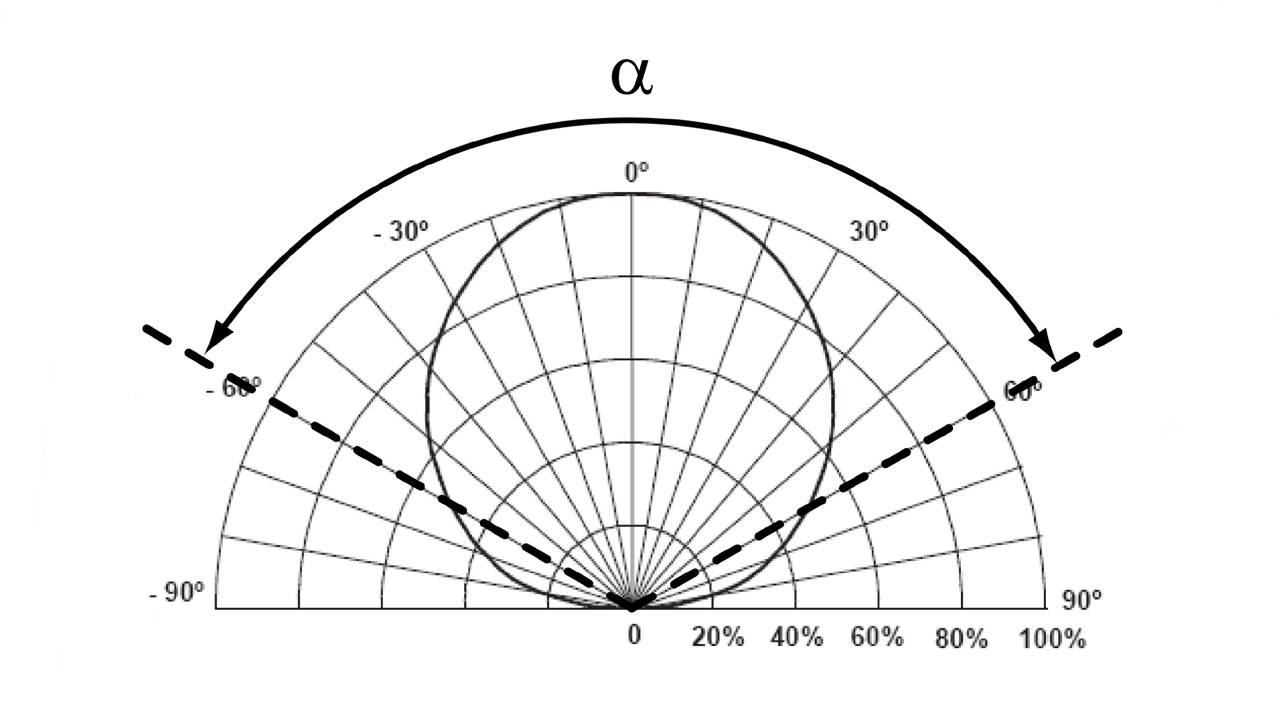 Another technical factor that the lighting engineer must evaluate in choosing a light source is the color rendering index. This aspect is fundamental in art gallery lighting projects.

Lighting techniques are a set of methods that ensure the suitable quality, quantity, and distribution of light for the desired use in projects ranging from interior lighting design to exterior building lights. To carry out a lighting project, once the concept has been established and the suggestions analyzed, we proceed to choose the illuminance level, the type of lamp, the type of lighting and device, the positioning of the luminaire, the distribution of luminous centers, the total luminous flux and, finally, the power of the lamp. In the distribution of luminous centers, uniformity depends on the way the light beams of the sources, spaced at an interval n, intersect on the plane. Following these points, a preliminary project is developed to establish a possible geometric and photometric solution. 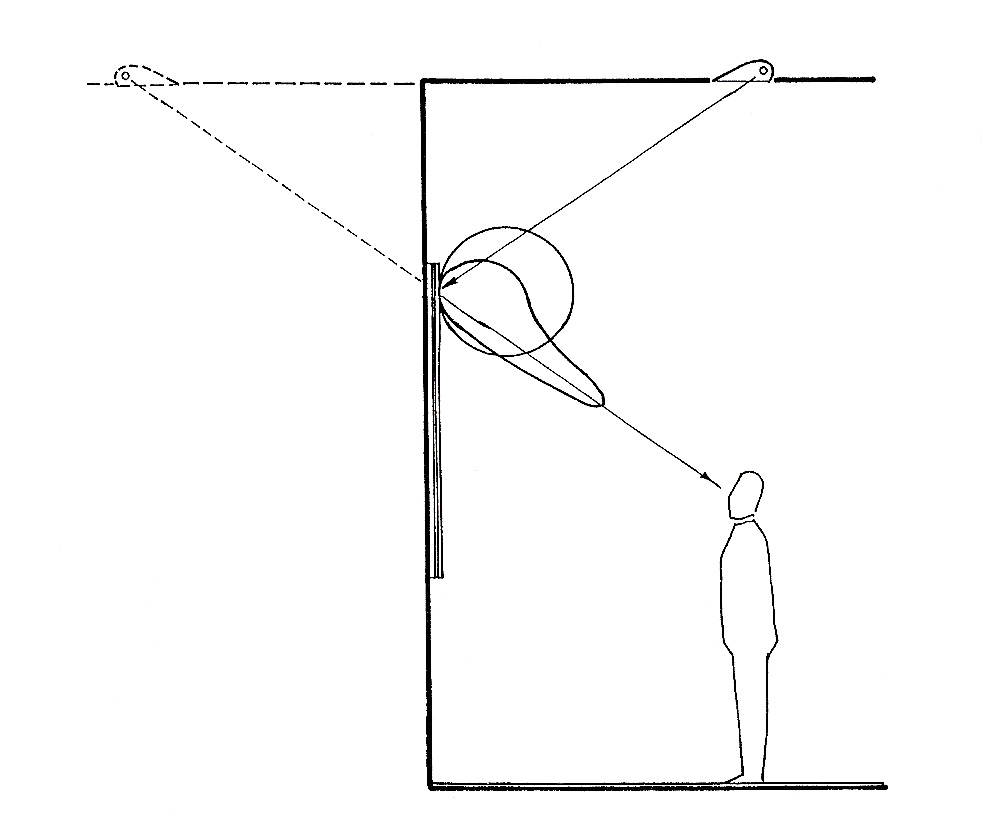 A precise test is then carried out on the illuminance levels, basically for the purpose of checking the degree of comfort of the system. The Italian lighting designers who came before us did not have calculation programs available. This meant that the work now carried out by software was carried out by them, through the application of the formulas outlined above. Knowing the laws of physics that make all this possible is the foundation of architectural lighting. Curiosity leads to continuous knowledge. It’s important to know the physical, geometric, and mathematical theories behind every project, to understand what leads to design choices, and to thus reveal the “backstage” of a project.